Sometimes a job is about far more than the bottom line.

Cass Precision Machining was honored to recently volunteer their time, material, and machines to produce a part for the Commemorative Air Force Airbase, located in Mesa, Arizona.

The Commemorative Air Force are flight museums dedicated to the education and enjoyment of present and future generations of Americans with a fleet of historic aircraft that recreate, remind, and reinforce the lessons learned from the defining moments in American military aviation history.

With a mission to educate, inspire, and honor through flight and living history experiences, the Commemorative Air Force offers flights to museum visitors four days a week in various planes, including the B-25 “Maid in the Shade” bomber, built in early 1944. With so many flights under its belt, the B-25 bomber had worn out its bushings on the arms for the Cowell flaps—parts that open during takeoff to allow air to flow through the engine and close during landings.

Cass Precision Machining was more than happy to volunteer their time and expertise to get the B-25 bomber back up in the air, flying more safely than ever. Airbase Arizona offers a rare and exciting opportunity for a living history flight experience. Guests are allowed to take a ride and soar among the clouds in the B-52 “Made in the Shade,” and hear the rumble and roar of the engines, feel the wind in their face, and imagine themselves as part of the flight crew from over 70 years ago. The B-25’s most famous exploit was the April 18, 1942, Doolittle Raid on Japan.

Whether you visit the museum in Mesa, Arizona, or catch them on one of their many summer tours, people are able to schedule a flight on one of the warbirds and commemorate history.

“Cass Precision Machining was fantastic for us. They got us the parts we needed for the B-25 faster than we expected, and we were able to get our planes back up in the sky,” said Dick Clifford, Commemorative Air Force Airbase, Arizona. “Cass could not have been nicer to work with; they provided high-quality parts to make our deadline.”

Cass’s bushings for the Commemorative Air Force plane are much better than the original as they are heat-treated, centerless ground and fit better, and last longer.

“The bushings Cass made for our planes are far superior to the ones they replaced, and will help in allowing us to fly these historic planes for years to come,” said Clifford.

“It’s an honor for Cass to be able to volunteer our expertise to help restore and keep the B-25 bomber flying for the Commemorative Air Force,” said Jim Garvin, Cass President. “Cass started as a company the same year WWII ended, and we’ve always done everything we can to help support the armed forces. To be able to provide a part that lets the B-25 bomber continue to fly and to fly safer than ever before is a thrill for us.”

Cass was more than happy to volunteer their time and professional expertise with the replacement bushings that allow the famous B-25 bomber to remain flying.

Change can be good for a company – be it small tweaks in the way you do things or big operational shifts. As we said in Part 1 of this blog series, taking an honest look at what’s working for your business and identifying opportunities for improvement is always a good idea. As you approach your annual planning process with an eye on identifying those key opportunities for improvement, one area to consider and assess is the performance of your machined parts suppliers. Switching machining suppliers can be a difficult decision to make, but choosing who supplies your incoming streams of materials, components or sub-assemblies can have a huge impact on your business.

END_OF_DOCUMENT_TOKEN_TO_BE_REPLACED

Cass Precision Machining is proud to announce that its President, Jim Garvin, has been named to the Board of Directors for Diversified Plastics, Inc. (DPI), a custom plastic-injection molder of high-precision thermoplastic components. As part of the board, Garvin will provide leadership and strategic guidance and serve as an adviser to DPI’s CEO and executive team.

“We welcome James to the board and look forward to his contributions as we grow the company,” says James Dow, Chairman of the Board at Diversified Plastics, Inc. “His well-rounded background in management, operations, business development and quality makes him ideally suited to help guide the company.”

As a member of DPI’s Board of Directors, Garvin will help represent the company’s shareholders. The board helps establish policies for corporate management and oversight and make decisions on major issues for DPI.

As President of Cass Precision Machining and former COO at Hutchinson Manufacturing, Inc., Garvin brings a long history of industry knowledge to DPI’s board. Garvin will provide thought leadership and add great perspective based on his depth of experience and network of influence. DPI is a full-service parts manufacturer that provides prototyping, manufacturing and assembly, so Garvin is a natural fit for their board of directors.

What is High-Volume Production?

The term “high-volume production” can mean many things to many people, from both a supplier and a customer perspective. What does “high-volume production” mean to us here at Cass? We’ve prepared an overview (View PDF) that illustrates the types of parts we run on a daily basis. Our hope is that this overview helps you start thinking about potential matches between your machined-parts requirements and our strengths here at Cass.

Our core-machining competencies include screw machining, CNC milling and turning, Swiss machining and precision grinding. When it comes to high-volume production, our capabilities match up best with parts up to 3.5 inches in diameter and under 12 inches long. Over the years we’ve migrated toward making more cylindrically shaped parts than anything else – at times up to 8 inches in diameter and up to 40 inches in length. The best way to leverage Cass’s machining and grinding capabilities is to release orders to us in the thousands of pieces and up. Through strategic investments in automation, we are running parts with EAUs in the millions without losing a beat.

END_OF_DOCUMENT_TOKEN_TO_BE_REPLACED

At Cass Precision Machining we’ve been humbled and honored to receive our share of recognition and awards over the years. The recognition is always nice, and it makes us proud of our company and our team—but it’s the knowledge that our customers are happy and satisfied with the work we do that gives us the most gratification. 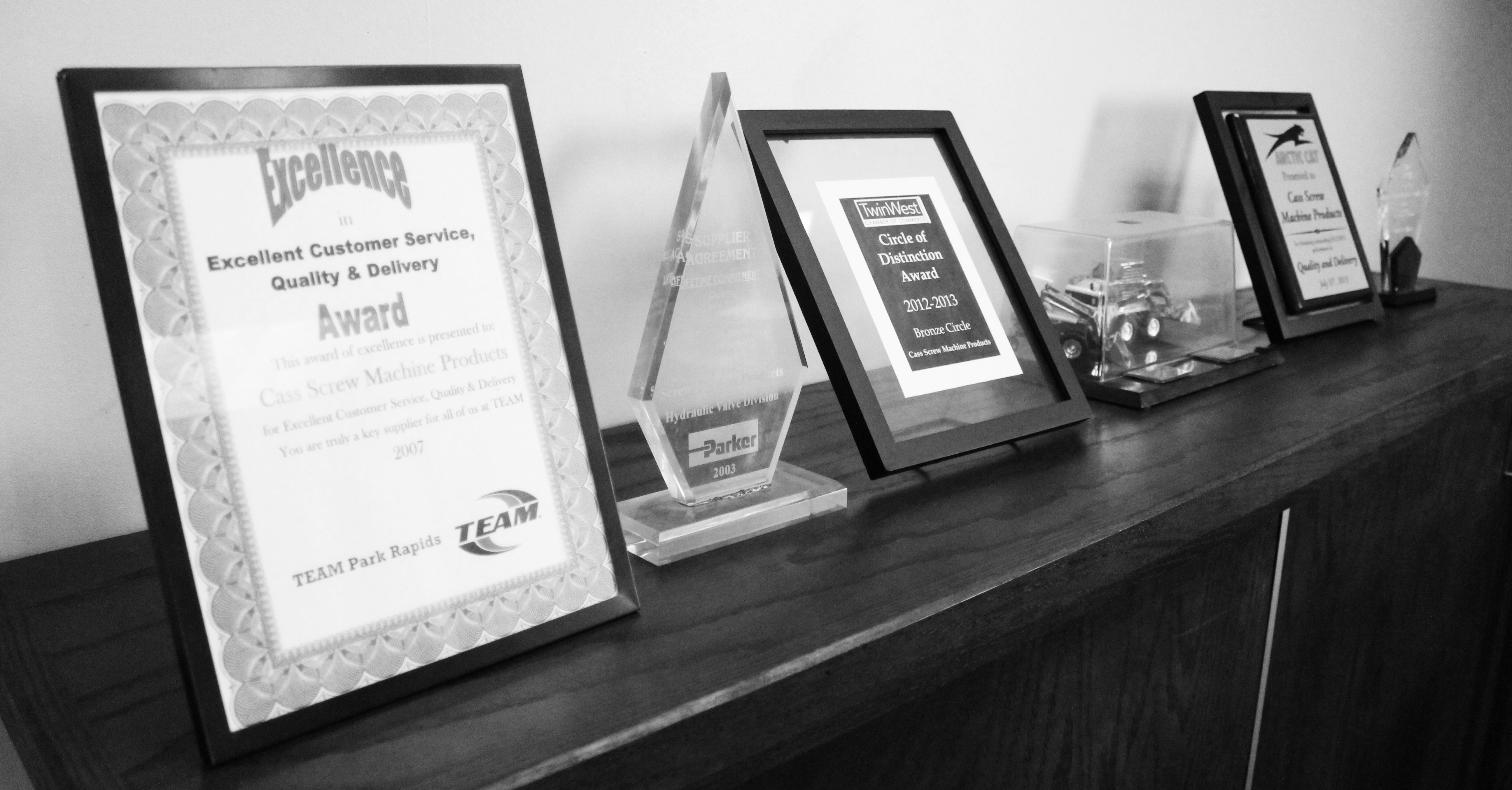 At Cass we take our responsibility to our customers very seriously as evidenced by our robust, proven Quality Management System (QMS) (download PDF). Everything we make passes several inspections, or it won’t go out the door. We also conduct cross-functional quality reviews every month at Cass to assess our QMS performance and results.

END_OF_DOCUMENT_TOKEN_TO_BE_REPLACED

We recently celebrated Steve Brown’s 51-year tenure at Cass Precision Machining! Cass President Jim Garvin is seen here shaking hands with Steve (the guy with the big smile on the right) following a special presentation that Jim delivered at our year-end meeting on December 18th 2017.

Steve started at Cass Precision Machining as an inspector in 1966 while attending college at the University of Minnesota. He graduated from the U of M while working full time at Cass, and then served in the US Air Force Reserves. Steve moved from inspection to the machine shop, helping to serve our customers in a number of machinist roles. In the 80’s, Cass recognized his leadership skills by challenging him with a foreman’s position. Steve obviously left a positive mark with the shop team as witnessed by the hearty farewells he received at this retirement celebration. In 1995, Steve joined the Cass sales team as a Sales Engineer, and served in this capacity for the past 22 years. It’s pretty amazing to note that many of us think of 22 years as a career, while in Steve’s case, it was “just a step along the way”.

END_OF_DOCUMENT_TOKEN_TO_BE_REPLACED

Another holiday season is upon us, which, of course, brings us near the end of another calendar year. While 2017 can only be described as “tumultuous” from a news headlines perspective, we hope the past year has been productive and successful for your business.

It was a big year for us here at Cass Precision Machining as we rebranded with a new name, logo and website that gives our customers a better view of the many ways that we can serve them.

The end of one calendar year and the beginning of a new one is always a good time for any business to reflect on their operations – to take an honest look at what’s working for you and identify areas where you could be doing better. One area to assess could be an evaluation of your machining suppliers. Switching your machining supplier can be a difficult decision to make, but choosing who supplies your incoming streams of raw materials, components or sub-assemblies can have a huge impact on your business.

In the first part of this series, we will discuss two key areas to assess in your relationship with your machining suppliers. If you find that your suppliers aren’t meeting your expectations in these areas, a switch to a new supplier could become a part of your 2018 continuous improvement plan.

END_OF_DOCUMENT_TOKEN_TO_BE_REPLACED 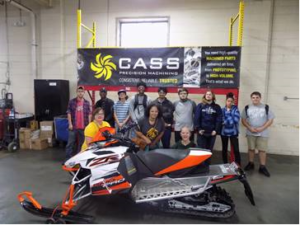 Thursday, October 5th was a fun day for us at Cass Precision Machining. Our participation in Minnesota’s Dream it. Do it. Minnesota Tour of Manufacturing Day resulted in Cass hosting about 100 10th through 12th grade students and 10 faculty members from local schools. After welcoming students to the Cass campus, Cass President, Jim Garvin gave opening remarks about career opportunities in precision parts manufacturing. From there, we split into smaller groups for a four-stop tour of selected areas within our five-building campus. Upon completion, we rallied the students around an exhibit that featured a few of our customers’ more exciting vehicular products, along with displays of the parts that we manufacture for each vehicle.

END_OF_DOCUMENT_TOKEN_TO_BE_REPLACED

As we cut over to our new name, we hope the completed FAQ’s below will address most of your concerns and questions regarding doing business with Cass. In the event you do not see the answer(s) you are looking for below, please feel free to address your question(s) to us via posting a message in the “Contact Us” page of our new website (www.CassPrecisionMachining.com), or you can directly contact our Business Development Manager, Dave Schuh at 763-535-0501 x223 or email Dave at [email protected].

END_OF_DOCUMENT_TOKEN_TO_BE_REPLACED

Please enter your information below and we will email you the Cass brochure shortly.